I’m in line at a juice bar. And all around me are not the flexing fitness fanatics one might imagine, quizzing the clerks on the probiotic content of the vegan yogurt substitute they are debating spending $40.00 on. Instead, it is the faces of Hollywood shielded by sunglasses, grimacing with pain each time they hear the blender whirl. Everyone here is recovering. They are all convinced that the elixir in the compostable cup will revive or–if they’re lucky–reverse the damage they did the night before. Yet, these people are only telling themselves half of the truth. It’s true that what magic they are imbibing will revive them and wake up their cells long enough to make it to whatever party awaits them tonight. What they don’t acknowledge is something I myself until this moment have ignored: this lifestyle is only keeping me alive–it is NOT living.
I’m here with the person who taught me to do this: “party rinse repeat”. He doesn’t have any money so I have to buy him the pricy hemp coconut chocolate protein smoothie. “Large”, he says. I’m not resenting of the forward request, only that he thinks that drinking more of this thing, this one time, will undo the damage he’s been doing to his body every night.
He wants to smoke a cigarette, and though at this time I’m still a smoker, the idea sounds so hideous. Shining a light on my own fake health.
I don’t want to always be recovering. I don’t want to sit in vegan restaurants and order something resembling chicken nuggets, because I lose the pleasure in my food if it looks like vegetables on a plate. I don’t want to lazily skip on an elliptical for 30 minutes earning only a glisten on my brow because it’s too hard to really push myself. I don’t want to just keep myself alive, surviving the day so I can have another night.

So, I don’t smoke that cigarette, and maybe it’s the blossom of me quitting? It most certainly is a moment of truth I cling to when the task of becoming better becomes heavy. It is much easier to live than to fight to stay alive. 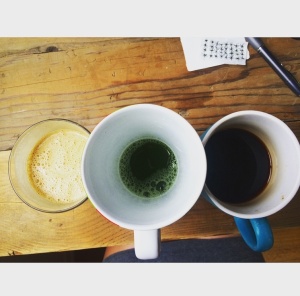